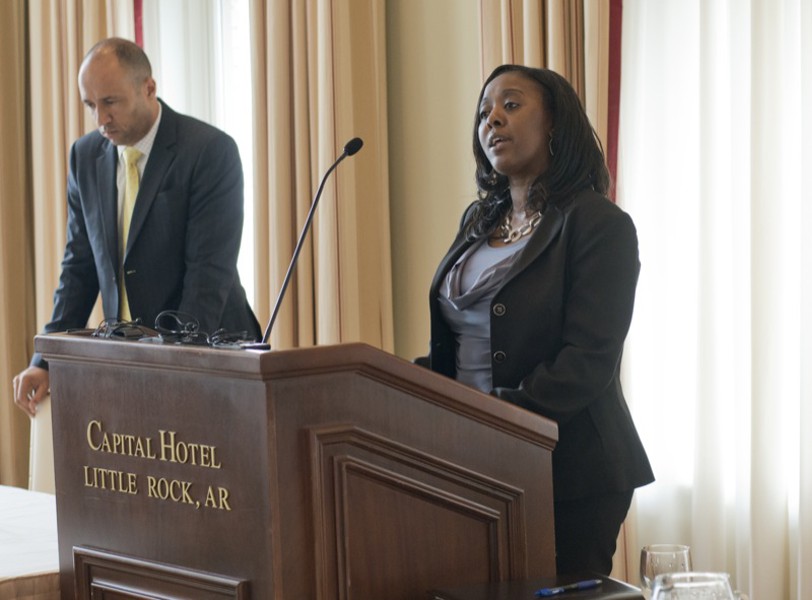 Hastings confronted Moore after an apparent break-in on August 12, 2012 and shot the 15-year-old as he attempted to flee the scene in a car. The officer claimed at the time that Moore was trying to run him down with the vehicle. It was later determined by the police that Hastings’ version of events was untruthful, and he was fired from the force. However, two criminal trials against Hastings ended in mistrials after juries failed to reach an agreement over whether to convict him for manslaughter.

Michael Laux, an attorney for Perkins, said today at a press conference held at the Capital Hotel that “the responsibility for [Hasting’s] actions are absolutely shared by Stuart Thomas and the City of Little Rock, because they permitted this to occur. It could not have occurred … without them turning a blind eye towards what was by all accounts a problematic and dangerous officer.”

“To the casual observer, it might seem that while this was a tragic shooting, the LRPD stepped in and did the right thing,” Laux acknowledged. “After all, they performed an objective investigation, they determined that one of their own unjustifiably shot and killed a 15-year-old boy, and then they terminated the offending officer.” But, he argued, Hastings should never have been hired in the first place — at the time of his hiring, a fellow officer objected to the fact that Hastings had once attended a Ku Klux Klan rally in his youth — and his conduct while on the force showed that he should have been dismissed long before his fateful encounter with Moore.

“Hastings was hired and retained in the face of overwhelming evidence that he was not a fit candidate for such an important job — especially in a city where 40 percent of the population consists of African-American folks,” said Laux. The attorney alleged that the LRPD’s long history of clearing officers of wrongdoing has created a “custom of acquiescence to police misconduct and toleration of excessive force, over years and years, one that causes officers like Hastings to act with impunity in the field, knowing that their discipline would be nonexistent or disproportionately light.

“That Josh Hastings would be involved in a police shooting of an African-American Little Rock citizen was as predictable as the sun coming up tomorrow. This was not a matter of if — this was a matter of when. The only variable that was uncertain here was who the unlucky victim was going to be. On August 12, 2012, that victim turned out to be Bobby Moore. … If a well-trained, reasonably prudent officer had encountered Bobby that August morning, and not Josh Hastings, there’s no doubt that Bobby would be alive today.”

A spokesman for the LRPD said that the department had no comment, but that it may release a statement at a later time.

Perkins, seated beside her lawyer, spoke briefly to reporters. “This loss that my family has suffered has been a nightmare. Bobby was my youngest child, and I loved him dearly. … I cannot bring my son back, but I can make sure that everyone who was responsible for his death is held accountable. Most of all, we want to make sure that this doesn’t happen to anyone else,” she said.

There are six separate counts in the suit, three against Hastings and three against Thomas and the city. U.S. District Judge Brian Miller is assigned to the case. Here’s the filing:
Perkins v. Hastings et al

Laux elaborated later on the allegations that the LRPD has created a culture in which officer misconduct is tolerated.

“Prior to the Bobby Moore shooting, the LRPD had never determined that a police-involved shooting was unjustified. There are officers on the force right now that have rap sheets that are very long and consist of very serious violations … and yet they remain on the force.

The department, he said, exhibits a “pattern of not just excessive force … but also patterns of untruthfulness, of disengaging and altering video devices. What I’ve come to learn is that if an officer in the LRPD plans on committing any misconduct, he or she is well served to disable their mobile video recorder and then engage in the misconduct, because the worst discipline they’re going to face is for the violation on the video recorder being off, and they will more likely than not be exonerated.”

He also criticized the LRPD’s policy of handling misconduct through internal investigations. “The problem with internal investigation is that it creates a system where favors are given and where preferences are shown, and leverage can be exerted. … Regardless of the facts, these things have historically been pretty much rubber stamped.” Laux said the LRPD’s failure to address problematic officers has resulted in a less effective police force. “The cost in terms of money, time and personnel that is spent reviewing and ultimately exonerating these officers — it makes the claims that there aren’t enough officers on the street somewhat laughable. It’s a misallocation of resources.”

Laux said he was confident the suit will yield a different result than the two criminal trials, both because of the different burden of proof involved in civil cases and because it will include evidence that was inadmissible in the criminal trials. He said he’s not yet sure of the damages his client will be seeking. “We don’t have a set amount in mind at this point. … I’d be remiss to speculate on that.”

IN A RELATED MATTER: Circuit Judge Wendell Griffen has scheduled a hearing on Hastings’ motion to seal the investigative record in his case, which the statute allows unless it could present harm to the public or not serve the interests of justice. Seems to me the facts of a police shooting are always a matter of public interest.