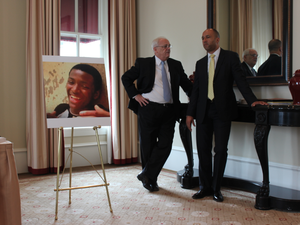 An attorney says he has filed a six-count federal civil-rights lawsuit in the death of a 15-year-old boy fatally shot by a Little Rock police officer in 2012.

Attorney Michael J. Laux said the lawsuit in the death of 15-year-old Bobby Moore III contends that Officer Josh Hastings acted with excessive force and that the city of Little Rock and the Little Rock Police Department are responsible for hiring him despite warning signs of trouble.

An attorney who previously represented Hastings questioned the merits of the suit. A spokesman for the Little Rock Police Department said she could not comment “on active legal matters.”

Laux alleged Hastings before the shooting had been untruthful and had deliberately disobeyed policy. He said Hastings was hired because of connections he had to the agency and despite the department knowing he had previously attended a Ku Klux Klan meeting.

Laux said the department should not be absolved because it fired and sought charges against Hastings after the shooting of Moore.

“It would appear that the system works,” Laux said at a news conference Monday in Little Rock. “But any conclusion that this set of facts reflects a properly functioning and accountable police department would be very inaccurate. The truth of the matter is simply this: That Josh Hastings would be involved in a police-involved shooting of an African-American citizen is as predictable as the sun coming up tomorrow. This was not a matter of if, it was a matter of when. The only variable that was uncertain here was who the unlucky victim was going to be.”

The lawsuit, filed in the U.S. District Court for the Eastern District of Arkansas, notes several allegations made against Hastings prior to the shooting including failing to write and submit reports, missing court dates and not submitting a use-of-force report.

Bill James, a Little Rock defense attorney who represented Hastings in two criminal trials tied to the shooting, said he believes Hastings has qualified immunity from the suit and that the case will never make it as far as a jury trial. But if it did, the fact that Hastings “didn’t have a perfect record” hardly indicts him as someone likely to kill a teen suspect, James said.

“That’s all fun stuff to talk about, the stuff that is in his prior disciplinary record,” James said. “But they have nothing to do with this case. There’s nothing in this case that indicates he was capable of doing something like they’re accusing him of.”

James said he had not reviewed the full lawsuit. He said he would be meeting with Hastings soon to determine if he would represent him on it as well.

Laux said he couldn’t speculate on the monetary damages that could be awarded if a jury sides with the plaintiffs. He said he is hopeful that the lawsuit will also spur adjustments within the Little Rock agency, including having it change its practice of conducting internal investigations when an officer fatally shoots a suspect. He said the Moore shooting was the first time the Little Rock Police Department had ever ruled such a shooting unjustified.

Hastings, whose father, Terry Hastings, retired as a captain after a long career with the Little Rock Department, was fired from the force and charged after the early morning shooting on Aug. 12, 2012. Two separate trials ended in hung juries, and prosecutors announced after the second that they would not try him a third time.

Attorney Michael A. Kelly, a second attorney also representing Moore’s family, noted that civil juries have a different burden of proof than criminal ones and that additional evidence that wasn’t admissible in the trials can be considered.

“We expect that a civil jury evaluating what happened to Bobby and the denial of his constitutional rights will have no such difficulty,” Kelly said.

But James said the different burden will also allow the defendants to focus on the criminal activity Moore was accused of engaging in and the items in the car when he was fatally shot, which included a gun.

“More information would be given to a jury about what was actually happening that night, which I think will only help Josh,” James said. “The more they know about what was going on and the realities of what they were facing that night will convince them even more so than the jury in the criminal case.”

Hastings had been dispatched to investigate a report Moore and two teens with him were breaking into vehicles on the lot of a Little Rock apartment complex.

Laux acknowledged that Moore “made some mistakes,” but said those don’t justify the shooting.

“He was 15 years old,” Laux said at the news conference, which was also attended by members of Moore’s family. “He did not deserve to die. If a well-trained, reasonably prudent officer had encountered Bobby on that August morning, and not Josh Hastings, there’s no doubt that Bobby would be alive today.”

Hastings contended he opened fire as the vehicle driven by Moore came at him in the dark parking lot. Prosecutors maintained the vehicle was stopped or moving backward when Hastings opened fire and that his decision to shoot amounted to “reckless” behavior.