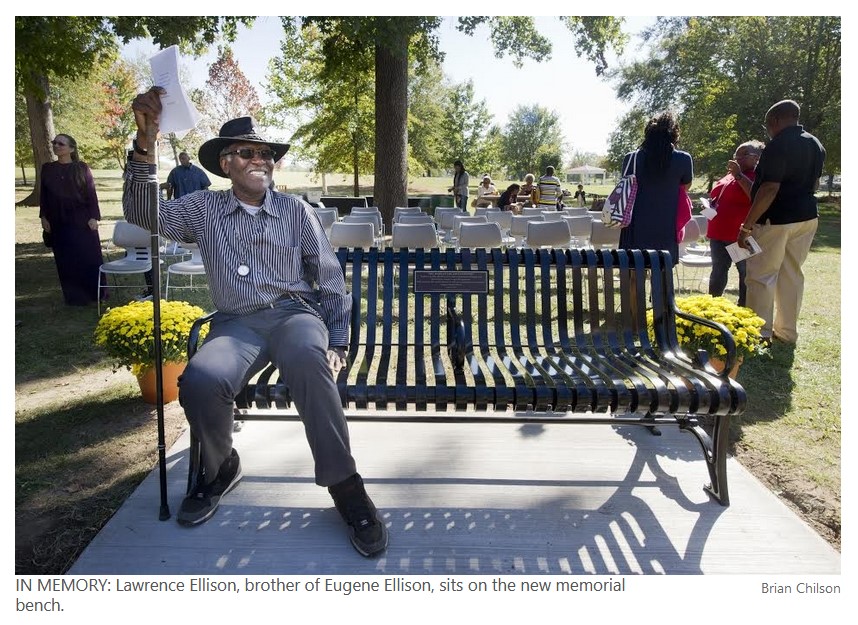 “I want the City of Little Rock and the nation as a whole to know his death was senseless and that a vital chapter of our lives was taken forever,” Spencer Ellison said, addressing a room full of reporters at the Capitol Hotel on Monday.

That’s the purpose of an 11-count lawsuit filed in Federal Court, according to Eugene Ellison’s family.

Ellison, 67, was shot and killed inside his Big Country Chateau apartment in December 2010 by an off-duty Little Rock police officer working security on site.

“This invasion of Mr. Ellison’s home and his killing by these officers were gross violations. of his constitutional rights,” said lawyer Mike Laux, who is representing the family.

Officers Donna Lesher and Tabitha McCrillis were subject to an internal investigation, following the shooting.

According to post-shooting statements, Lesher and McCrillis saw Ellison’s door was open, and they checked on him to make sure he was okay. They described the inside of his apartment as being in disarray.

According to Laux, repeated questioning by te officers eventually irritated Ellison. The officers then entered the apartment, and according to Laux McCrillis instigated physical interaction by shoving Ellison.

He then retaliated in what the Little Rock Police Department described as an intense struggle. The officers called for back up, which arrived at the apartments.get Lesher out of the apartment.

According to Laux, that’s when Lesher made a “most reckless and callous act” by shooting into the apartment, striking Ellison twice, killing him.

“Still outside, still surrounded by three other officers, she drew her service revolver and shot into the apartment,” Laux said. “You have four police officers, four batons, four canisters of pepper spray. Collectively over 600 pounds with something like 30 years of police experience all standing outside Mr. Ellison’s apartment. Any fear or anger Officer Lesher was feeling should have been gone.”

Prosecutors found the pair justified in their actions.

“Officer Lesher and McCrillis were questioned by superiors and colleagues who are all people who have a vested interest in the outcome of such an investigation,” Laux said.

Laux and Ellisons family are questioning how the investigation was handled, by Little Rock police instead of Arkansas State Police. They allege Police Chief Stuart Thomas and the City of Little Rock have turned a blind eye to the use of excessive police force and warrant-less searches.

“The LRPD cannot change the facts or run away from them. The facts speak for themselves and thank god they do. Because Mr. Ellison cannot give his side of the story,” Laux said.

Ellison’s son Troy still works with the Police Department as a detective, but he would not comment on if he had observed such practices of ignoring citizen complaints.

“While we still grieve, the Ellison family will remain strong and diligent,” Spencer Ellison told the group at the Capitol Hotel.

Troy Ellison intends to continue working for the Little Rock Police Department, but he and his brother Spencer will not stop demanding justice for their family.

The City of Little Rock is aware that a suit has been filed. Speaking with City Attorney Thomas Carpenter, he had spoken with the litigation team and they thought it best not to comment on the lawsuit at this time.

Little Rock Police Chief Stuart Thomas, in a written statement, said, “This incident has undergone intense Departmental review and the actions of the officers were exonerated by both the Prosecuting Attorney and the Department. Further, I do not believe that the proof will ultimately support the allegations of unlawful customs or practices by this Department, and I have been assured of a vigorous defense by the City Attorney’s Office.”

Agents of The Big Country Chateau corporation, also named as a defendant in the suit, were not aware it had been named in a lawsuit, and they requested to await notification prior to commenting on the lawsuit and the counts against the company.[/vc_column_text][/vc_column][/vc_row]