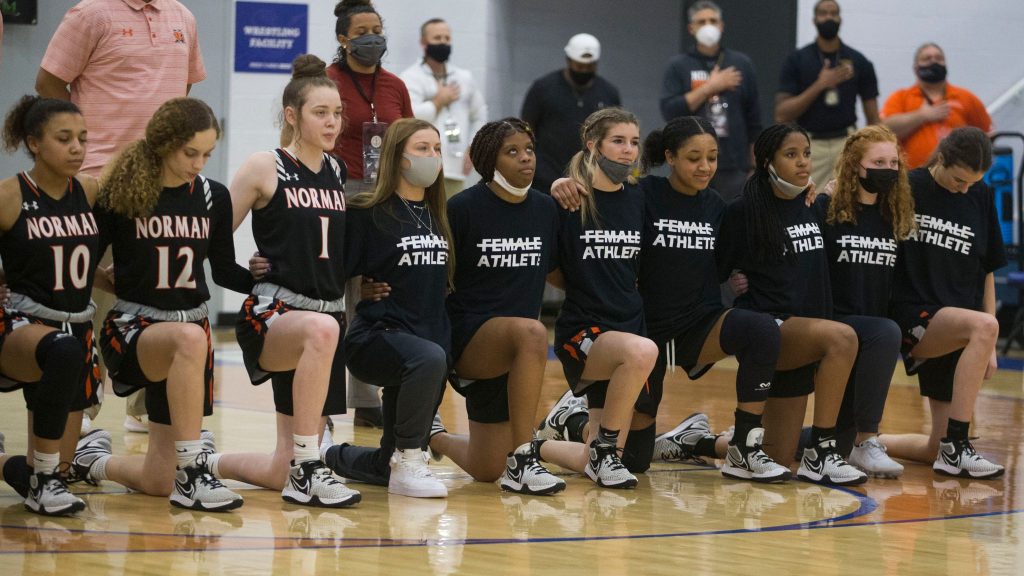 [vc_row type=”in_container” scene_position=”center” text_color=”dark” text_align=”left” overlay_strength=”0.3″][vc_column column_padding=”no-extra-padding” column_padding_position=”all” background_color_opacity=”1″ background_hover_color_opacity=”1″ width=”1/1″][vc_column_text]NORMAN, Okla. (KFOR) – The Norman High School girls basketball team along with their attorneys held a press conference after the players were the subject of racist comments from an announcer.

An expletive and a racial slur were heard on a hot mic as the Norman basketball team knelt during the national anthem.

“This was more than just a racial slur, as ugly as it was, this was the imposition of a bankrupt philosophy on these young women,” attorney Mike Laux said.

“I took a knee to take stand against social injustice and racism. When I first heard the news that our team was called the n word, I was just in disbelief, and the broadcaster should be held accountable so something like his doesn’t happen in the future,” player Zya Vann said.

“I will always stand in support of my team. This is a team decision to kneel and just want this to be a lesson to the rest of the world that there’s not place for racism here,” player Ansley Orrell said.

“It infuriated me to the core. I don’t understand in this day and age, how any of those thoughts are even in people’s heads,” Orrell’s father said.

The attorneys say they’re not seeking any legal action against the announcer right now. He has been identified as Matt Rowan. He issued an apology Friday, saying his high blood sugar sometimes causes him to say inappropriate things.

The team received praise for how they handled the situation, and going on to win the tournament.

“It feels really like a Disney movie. You all had this adversity. And you all kept going, and you won the state tournament. What a great ending to a movie, but the best thing about this it’s not fiction, it’s fact, it’s real life,” attorney Ben Crump said.

NFHS released a statement that reads:

“We strongly condemn Matt Rowan’s racist comments, and we immediately and permanently severed all ties with him and his production company as soon as we learned about the incident. He will never work with us again. We firmly back the Norman High School girls basketball team and commit to rooting out racism in high school sports and throughout our society.

We know Mr. Rowan’s remarks have caused profound pain to the Norman high school athletes, students, their families and the community as a whole. We have started outreach to members of the school community to determine the most effective ways to be part of the solution.”[/vc_column_text][/vc_column][/vc_row]